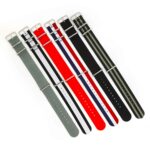 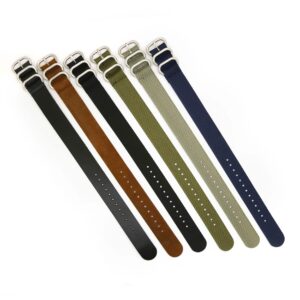 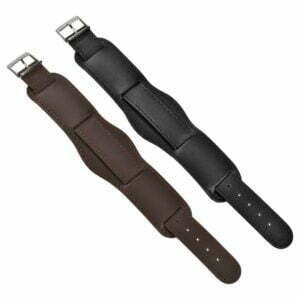 Statment look with supporting history, initially developed by the British Ministry of Defence, the NATO watch strap has become very popular for several reasons.
Weaverham Nato straps are available in either nylon or leather. Their design means the watch head sits on the strap itself, therefore, avoiding any contact between the watch and skin.

Included with this watch strap:

History of the Nato Watch Strap

NATO watch straps or NATO Straps as they are more commonly known, are watch straps that were initially developed by the British Ministry of Defence for wartime use.

The way the NATO watch strap is designed prevents the watch head from touching the wearer’s skin; it also offers a very clever design functionality. The is NATO strap is constructed from two pieces of nylon and designed in a way that if spring bar were to become damaged the watch would still be attached to the wearer’s wrist – a lengthier part to wrap around the wrist and the other shorter part that loops on the other side of the watch case.

Originally all these watch straps were categorised as “Admiralty Grey” in colour, and available in a 20mm width, with chrome-plated brass buckles. All these MOD or Military watch straps were finally nicknamed G10 straps after the store’s location for them. If you were a serving military member and needed a new watch strap, then a G10 form would need to be completed to purchase one. Ever since that time, the G10 NATO watch strap is now a favourite among watch lovers around the world.

The NATO Strap was utilised in many James Bond films, and Omega published limited-edition variations of this strap in their own watch collections.

NATO straps are famous for being relatively cheap, and the buckles and retainers are often referred to as hardware. NATO straps are known for being easy to wash and change. NATO straps or G10 straps can be found in various sizes, lengths, and colours to accommodate their ever-increasing demand.

Free delivery on all orders